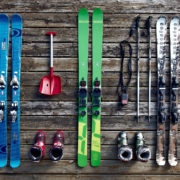 At Queenstown Physio we see hundreds of knee injuries every season, mostly from skiing.  They are typically ligament injuries, most commonly MCLs. They tend to be twisting-type injuries where the knee becomes the pivot point. Skiers can also have more serious knee injuries such as ACLs, and again, that’s when a person’s ski doesn’t release from their boot. Another injury specific to skiers is “skier’s thumb” – when skiers fall and the pole forces their thumb backwards injuring the ligament.

Snowboarders, on the other hand, come to our clinic with mostly upper limb injuries because both their feet are attached to the board, so they don’t have the same twisting force to the lower limbs. Snowboarding injuries are commonly fractured wrists or collarbones, or shoulder and elbow dislocations. However, snowboarders can also rupture their ACL following a “big air, flat landing”, where they overshoot a jump and miss the angled slope, and land on the flat with their quad muscles absorbing the full force of the landing. Then there is “snowboarder’s ankle” or a talus fracture, also from landing hard after a jump. This injury has become more common since snowboarding increased in popularity.

Injuries are usually the result of the force of a fall, but sometimes it is purely bad luck and the way the person happens to fall. However, clients often blame fatigue. Our physio Deborah’s advice?
“We always say, don’t call last run.” As the name implies, “last run” is the last run before heading to lunch or home for the day, and this can often be when an injury occurs. She says that “weekend
warriors” like herself are most at risk from fatigue-related injuries. These are people who work Monday to Friday and go to the mountain only on weekends. “We’re likely to think we’ve only got the weekend, and then we go too hard and too fast.” Another common cause of injury is people exceeding their technical ability. People go too fast for their skill level, use the chairlift before
they can get off safely, or progress to the more challenging slopes or the terrain park – where the jumps and other man-made obstacles are – before they are ready. There are other factors that can play a part, such as poor gear setup, particularly if the boot binding is too tight and doesn’t release; and icy conditions, which make falling injuries more severe. That’s when we see whiplash and concussion, which we see in both skiers and snowboarders. Or it can be breaks and fractures.

There are ways to mitigate the risk of injury, and Deborah’s advice to clients is simple and easy to follow: “Obviously the stronger and fitter you are, the less likely fatigue will play a part in any injury. But I always tell my clients to walk from the car park and not to take the shuttle, because the walk is a nice, gentle warmup, especially for lower limbs. And then to ease into it on the
slopes, start gently.” Deborah recommends protective gear, including helmets for everyone and wrist guards for snowboarders, particularly for beginners and those progressing to the terrain park where there’s further to fall and, therefore, more force in the landing. After a day on the slopes, Deborah would encourage stretching, particularly the lower limbs – quads, hamstring, glutes and hips. For pre-season preparation, Deborah prescribes squats, particularly done on an uneven surface to challenge balance as well as build strength.

The most common question Deborah gets asked is: “When can I get back on the snow?” For clients on holiday from Australia, the question becomes more loaded. “In the more serious injuries,
that’s really easy to answer: they won’t be back. But in a grade one sprain in any ligament – and the majority is knees – it can be a bit more challenging because they’ve got a limited time and a small injury, and they don’t want it to affect their whole holiday.” Deborah stresses the need to respect healing timeframes, but knows that this can fall on deaf ears. “Often, I recommend that they don’t ski, but I know that a lot of them will. I explain to my patients that they won’t ski to their full ability if they’ve got a little niggle, and that puts them at risk of
other injuries.” When assessing whether a client is fit for return to the ski field, Deborah uses a checklist to assess strength, ability and balance. For an injured knee, she will get clients to hop, jump and lunge. “With a hop, I’m looking more at their power up. When they’re jumping, I’d look at how they land comparing left and right. And with skiers, you need that sideways agility so that’s the lunging or jumping out on one leg to the side.”

In Deborah’s opinion, the risk of injury is small and shouldn’t stop people enjoying the snow. She has worked in a first aid clinic on Coronet Peak and says the statistics tell the story: “On a busy day, we might see 30 patients, but there would be 3,000 or 4,000 people up the mountain. Obviously, some come straight down the mountain, but overall injuries are a very small proportion of the number of people up there having a great time.”