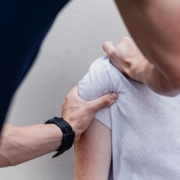 Physiotherapists say they could help relieve pressure on general practices by seeing more people with complaints such as soft tissue injuries and joint pain. Palmerston North physiotherapist Fiona O’Connor said they see and treat people without them having to see a GP first. She said part of the problem was that a lot of people were not aware they could go directly to a physiotherapist. If people had an injury such as a sprained ankle, ACC would partly cover the cost of their physiotherapy treatment. If a physiotherapist was concerned there could be a fracture or other serious injury, they could make a referral for an x-ray or scan. “People in the community probably don’t understand they can come to us with something like a sore knee straight away. They don’t have to go to ED for an X-ray.” O’Connor said she had been in touch with the primary health organisation Think Hauora to see how they could work together to promote physiotherapy as an alternative to GP appointments or ED visits. She said physiotherapists could help people with long-term conditions such as osteoarthritis and joint pain, but unless people had relevant health insurance, that came at a cost to the patient.

Physiotherapy New Zealand chief executive Sandra Kirby said there was capacity for physiotherapists to see more people now, while primary health care was under pressure, and in future as the health reforms bedded in. She said there was international and national evidence that physiotherapy could help manage muscle and joint pain, and was better than painkillers in improving people’s quality of life and delaying the need for hip and knee surgery. The problem was that it was not funded. “What stops people asking for us is that they don’t know they can come to us directly, and that it’s not subsidised unless it’s an accident.” She said the establishment of Health New Zealand gave physiotherapists hope that their long-term patients might be funded in future. Physiotherapists were talking to health leaders and primary health organisations, and there were some pilots underway for funded access, but not in MidCentral. “What we are calling for, and what the language being used suggests it might happen, is that people get access to funded primary care from physiotherapists. “But the only way that will happen at the moment is if primary health organisations give us some funding to enable people to access our services.” Kirby said although there was a shortage of physiotherapists in parts of the country, they still outnumbered GPs, and had capacity to help. “If everything was fully funded, then we would need more of us.”